At the end of May, a field expedition organized by Rewilding Ukraine to conduct scientific counts of the Dalmatian pelican and a photo mission took place in the Ukrainian part of the Danube Delta, as part of the “Pelican Way of LIFE” project. The counts were conducted by Maxim Yakovlev, an ornithologist at the Danube Biosphere Reserve, who has been photographing nature and the inhabitants of this picturesque region for more than 15 years. He was assisted by zoologist Alexander Gaidash.

During the course of the week, experts inspected all major water bodies in the Ukrainian Danube region – Lakes Kytai, Yalpug, Katlabukh, Cahul, Kugurlui and Lung, as well as the Kiliya arm of the Danube and its coastal areas. Particular attention was paid to the areas where Dalmatian pelicans have been observed in recent years.

Pelicans are an ornithological symbol of the Danube Delta. They are closely connected to wetlands and their relative numbers are a good indicator of ecosystem health. Worsening environmental conditions result in fewer fish for pelicans; a sharp drop in numbers may indicate that something bad is happening in nature and it is therefore very important to conduct regular counts. Ornithologists have been conducting such surveys in the Ukrainian part of the Danube Delta for several decades. They monitor how the number of birds changes and for what reasons in order to understand how they are affected by human activities and natural processes.

Two species of pelicans inhabit the Danube Delta – white and Dalmatian pelicans. Both are listed in the Red Book of Ukraine and a number of international environmental lists. During the counts it is important for us to find out the number of birds, and to note which places they choose for feeding, resting or nesting.

“During this year’s expedition we paid special attention to the wetlands of Lake Kugurlui, as this is the only place within the Ukrainian part of the Danube Delta where several pairs of Dalmatian pelicans have successfully nested in recent years,” explains Maxim Yakovlev. “In 2000 there was also an unsuccessful attempt to breed in the Danube Biosphere Reserve.”

The Danube Delta rewilding area is a wide floodplain and at the exit to the sea the river is divided into several branches: the Kiliya arm in the Ukrainian part splits into several natural channels, while in the Romanian delta there is the Sulina arm, which also forms a network of estuaries and channels. Some parts of the delta – especially some protected areas of the Danube Biosphere Reserve – are very difficult to reach from land. Of course, pelicans love such wild areas, which are usually visited only by scientists and state inspectors.

“Finding and counting pelicans was a huge challenge in some areas,” says Yakovlev. “For example, to count the birds in the area of the Kuril shoals – shallow areas covering an area of about 1500 hectares and located in the coastal part of the delta on the border with Romania – we had to first go by motorboat, and then use a smaller boat propelled through mud and thickets of aquatic vegetation by a long pole.”

In this fish-rich area the scientists recorded this winter more than 150 Dalmatian pelicans, which is a record number for this species in all the years they have been observed. Things were a bit easier on the Danube lakes, because most of the sites could be reached by car. But even here not everything was straightforward. The inner mosaic areas of the lakes, which are favoured by pelicans, turned out to be so shallow that it was impossible to reach them by boat. At moments like this the drone helped a lot, allowing the pair to inspect seemingly impassable areas and collect unique scientific material, while binoculars and telescopes also proved useful.

A total of 58 Dalmatian pelican were observed during surveys in the Ukrainian part of the delta. Most birds were found by experts in the coastal part of the Danube Delta. In some areas there were groups of birds up to 10 or more individuals.

In recent years, the number of both white and Dalmatian pelicans in the Danube Delta has begun to grow. During the nesting period, most of the birds observed are single or immature birds. Their main “maternity hospital” is located in the Romanian part of the delta, while they mostly feed in the Ukrainian part. During nesting birds are very vulnerable and need complete isolation from humans and predators. There are cases when birds have abandoned their nests even after limited disturbance (usually by fishermen).

“In my opinion, the main reason for pelican population growth in the delta is the fact that the birds have received better protection and they have remained undisturbed during nesting,” says Yakovlev. “In the record-sized groups observed during winter, there are probably not only pelicans from the delta, but also from countries such as Kazakhstan and Uzbekistan. In the past the birds did not overwinter in our country, but with climate change and an increase in the number of frost-free days, the number has started to grow.” 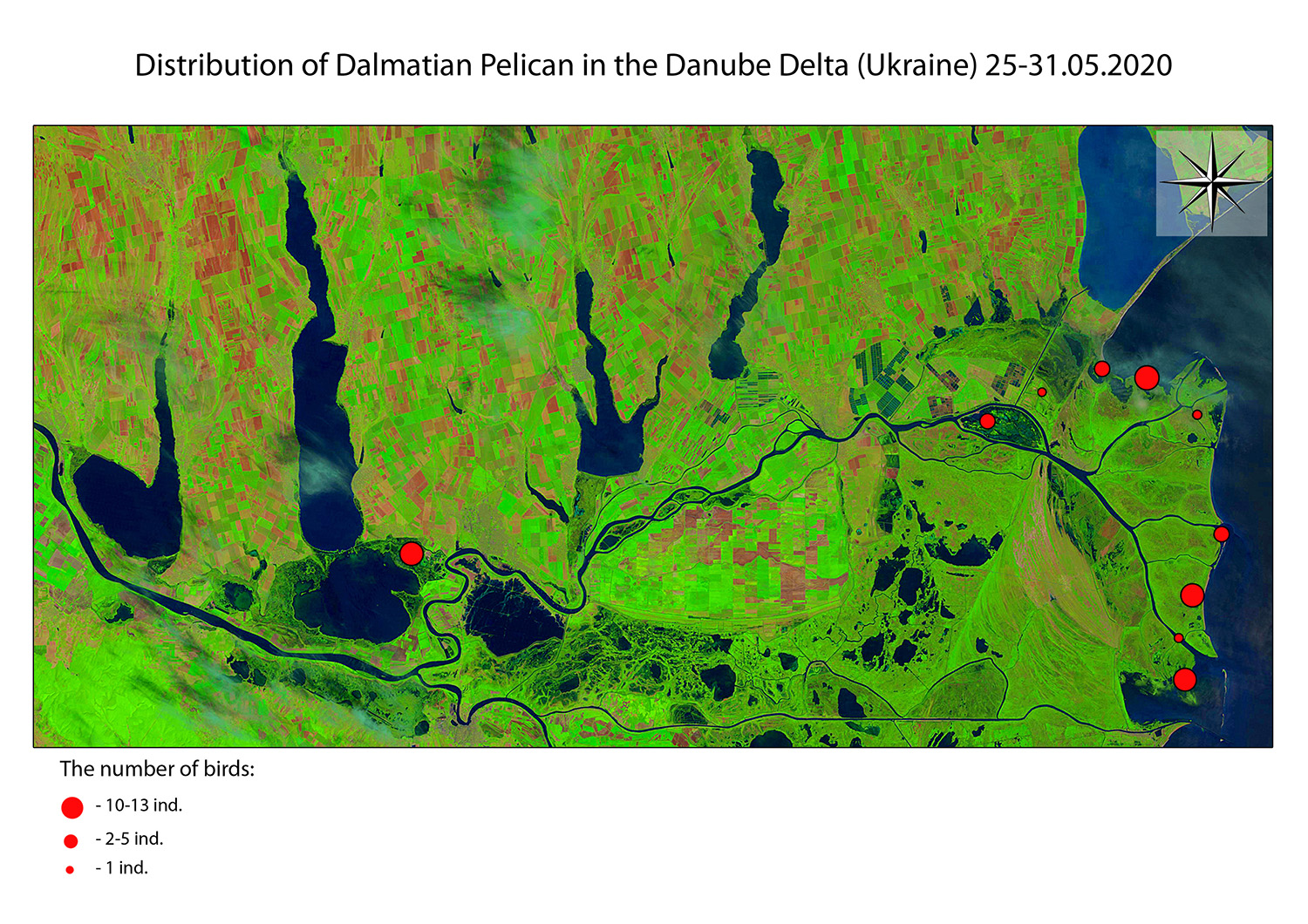 An investigation into areas that pelicans could later use for nesting was also made. Next year, as part of the Pelican Way of LIFE project, the Rewilding Ukraine team and partners plan to build several artificial nesting platforms for Dalmatian pelicans. The experience of other countries, such as Bulgaria and Romania, shows that the birds are happy to use these structures for their nests and to hatch chicks.

On Lake Kugurluy, where some pairs of Dalmatian pelicans had nested in previous years, the scientists failed to find any nests. This was probably because someone had burned vegetation on the island where birds had nested in previous years, and pelicans did not start nesting or changed the location of their colony. Flooding has often destroyed nests and eggs in recent years, as the water level in the reservoir is dynamic and regulated by a system of sluices on the Danube side.

In this case, it would be effective to build a platform on the lake, but it would attract not only birds but also people, who could damage the object or disturb the pelicans. Lake Kugurlui is a wetland of international importance, but it only recently received the status of a water body of national importance. In the future it may be possible to protect certain areas from human intervention, and then it will be possible to install a platform.

“Unlike the lake, the coastal part of the Danube Delta in the Danube Biosphere Reserve is under permanent protection,” explains Yakovlev. “Our task is to find the most comfortable place for nesting birds. The platforms act as a kind of high island, isolating the colony from predators. We hope that the construction of platforms will bring results, and we will soon see the Dalmatian pelican chicks in the reserve.”

The “Pelican Way of LIFE” project, which helps preserve and restore the Dalmatian pelican population in the Black Sea and Mediterranean, focuses not only on species research and practical conservation measures. We understand the importance of raising awareness of this majestic bird, which is an ambassador of healthy rivers and wetlands. Only with the support of the local communities and a wide range of parties will rewilding measures be successful. We place a lot of emphasis on communications, which is impossible without inspirational, eye-catching photos. The photo mission that accompanied the scientific counts was also an interesting and difficult task.

“Pelicans are very graceful,” says Yakovlev. “Their powerful figures in the sky, with a wingspan of up to 3 m, during the flight resemble a parade of paragliders. This spectacular flight causes a flurry of emotions in many people. I will tell you that birds evoke no less emotions if you see them up close. Their peculiar appearance, reminiscent of an ancient creature from the era of dinosaurs (and not without reason, because the first relatives of modern pelicans lived in that era), beak in the form of a bag, are just fascinating. It is incredibly interesting to watch the collective hunting of pelicans, cormorants, terns and martins. When you witness this action, you want to engrave these moments in your memory and share them with others. Cameras and video cameras can help with that.”

“Photos and videos give the opportunity to get to know our nature better, to plunge into the incredible life of its inhabitants. Indeed, it is not so easy to get a good shot. We all know that the birds are very dynamic and they quickly react if they see people. That is why you often have to sit motionless for several hours with mosquitoes, kneeling in the mud, to be able to make a good shot. But if the birds are not frightened, they let you come very close. In our time, good cameras with long-range lenses have come to the rescue. Such equipment is expensive and not everyone can afford it. But I will tell you that technology plays an important but secondary role. To make a good shot you need to have patience and determination, and most importantly – you need to get closer to nature, understand it and even become part of it.”

“Finally, for those who want to learn how to distinguish different species of pelicans. Are Dalmatian pelicans really curly, and white pelicans have a white color? Partly yes, these are their characteristics, but not the main ones. When flying white pelicans can be distinguished by dark stripes on the ends of the wings, and, unlike the Dalmatian pelicans, they are usually gathered in large flocks, numbering dozens or even hundreds of individuals. Dalmatian pelicans are usually seen alone or in small groups. They have grayish-white plumage, up close they really have a “tuft” of feathers. White pelicans can range in color from pink to white, only the young have shades of gray and their “tufts” are much shorter and not always noticeable, and they also have a leathery pink area around the eye, devoid of feathers.”

The “Pelican Way of LIFE” project (LIFE18 NAT / NL / 000716) is coordinated by Rewilding Europe and funded by the LIFE Programme of the European Union and the Arcadia Foundation.