During the fourth Southeastern European Pelican Census simultaneous measures were taken in many European countries to count two globally endangered species – Great white and Dalmatian pelicans. In Ukraine the counts took place on May 15-21 as part of the “Pelican Way of LIFE” project, being implemented in our country by Rewilding Ukraine in cooperation with the Danube Biosphere Reserve (DBR).

The counts were made by DBR staff – ornithologist Maxim Yakovlev and zoologist Alexander Gaidash, joined by the executive director of Rewilding Ukraine Mykhailo Nesterenko. In search of pelicans, biologists visited the Danube Lakes – Kitaj, Yalpug, Katlabuh, Cahul, Kugurlui and Lung, the Kiliya branch of the Danube and its coastal areas, and the Sasyk lagoon. Various modes of transport, from SUVs and boats to pedestrian crossings, and modern equipment – binoculars, telescopes and a quadcopter – were used to survey all areas, often quite remote and difficult to access.

Two species of pelicans live in the Danube Delta – Great white pelican (Pelecanus onocrotalus) and Dalmatian pelican (Pelecanus crispus). Both are listed in the Red Book of Ukraine and a number of international conservation lists, including the IUCN Red List of Endangered Species. The pelican is an ornithological symbol of the Danube delta and an ambassador of healthy and well-connected wetlands.

“During the counts in the Ukrainian part of the Danube Delta we recorded more than 2,000 Great white pelicans and 83 Dalmatian pelicans. It was important for us to learn about the number of birds in certain areas, to note what places they choose for feeding, resting or nesting. The largest number of Dalmatian pelicans was observed on the lake Lung, which is a part of the lake Katlabuh. The birds rested on the edge of the reed thickets near one of the islands. We can assume that in the future, under certain conditions, pelicans may begin to nest in this area. It is also nice to note that this year we observed more Dalmatian pelicans compared to last year’s records, when 58 individuals were recorded,” says ornithologist Maxim Yakovlev. 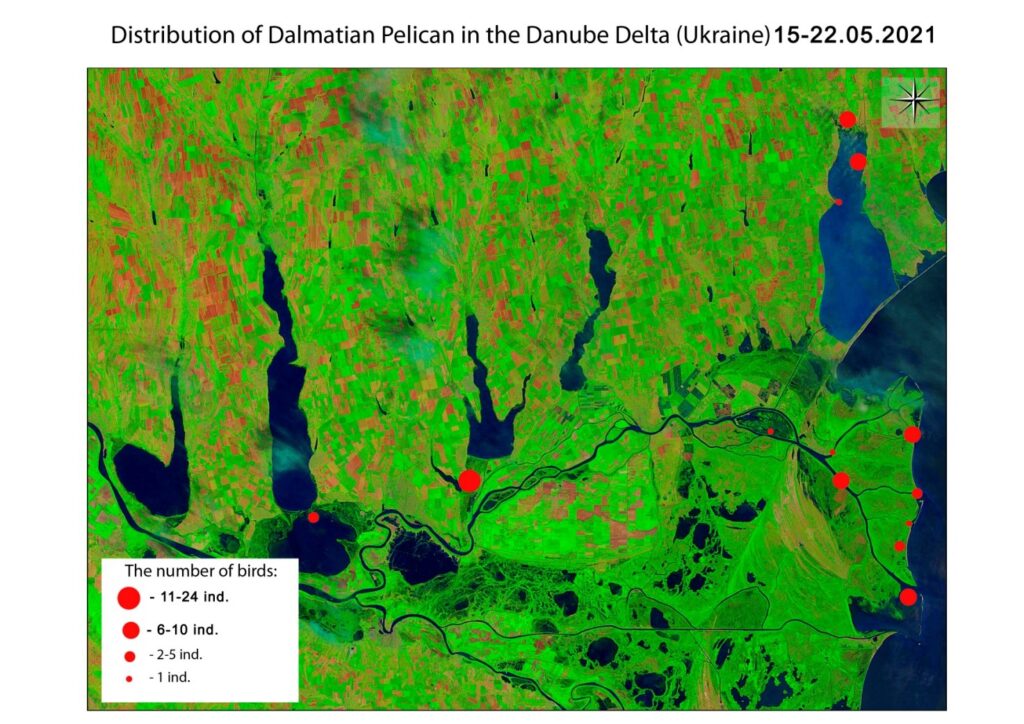 Despite the stormy wind, rain and occasional hail that accompanied the expedition for several days, the survey in Ukraine coincided with events in other neighboring countries, which allows scientists to get a more or less accurate estimates of the number and distribution of Great white and Dalmatian pelicans in southeastern Europe. In Bulgaria, the scientists from the Bulgarian Society for the Protection of Birds counted 513 Dalmatian pelicans and 575 Great white pelicans. In Romania, surveys were conducted by the Romanian Ornithological Society together with the Danube Delta Biosphere Reserve. The Hellenic Ornithological Society in Greece was the coordinator of the fourth Southeastern European Pelican Census.

“Pelicans are ambassadors of healthy wetlands, and their numbers and distribution are markers of the health of ecosystems. Therefore, it is very important to keep regular records of these bird species, as well as to make efforts to preserve and restore their populations and habitats. This year we plan to build the first artificial platform in the Danube Biosphere Reserve, which pelicans will be able to use for nesting and rest. Given the experience of other countries, these platforms are quite effective. So, although we did not notice the nests of the Dalmatian pelican this year, the next one, we hope, it will be roosting in the Ukrainian part of the Danube Delta,” adds Mykhailo Nesterenko, Executive Director of Rewilding Ukraine.

The “Pelican Way of LIFE” project (LIFE18 NAT/NL/000716), which helps preserve and restore the Dalmatian pelican population in the Black Sea and Mediterranean, focuses not only on species research and practical conservation measures. We understand the importance of raising awareness of this majestic bird, which is an ambassador of healthy rivers and wetlands. The project is coordinated by Rewilding Europe and funded by the LIFE Programme of the European Union and the Arcadia Foundation.

Nature does not know boundaries or a history of an owl