Photo mission: looking for pelicans in the Danube region

Dimitris Vavylis, the Greek conservationist and photographer, continues his photo mission along the Black-Sea Mediterranean Flyway of the Dalmatian pelican. This time he visited the picturesque wetlands of Bulgaria and also the gorgeous Danube delta – one of Europe’s last truly wild places, as the photographer said. Read the blog accompanied by the stunning shots from the region to find out more about the life of the pelicans and the conservation efforts of the “Pelican Way Of LIFE” initiative, coordinated by Rewilding Europe. 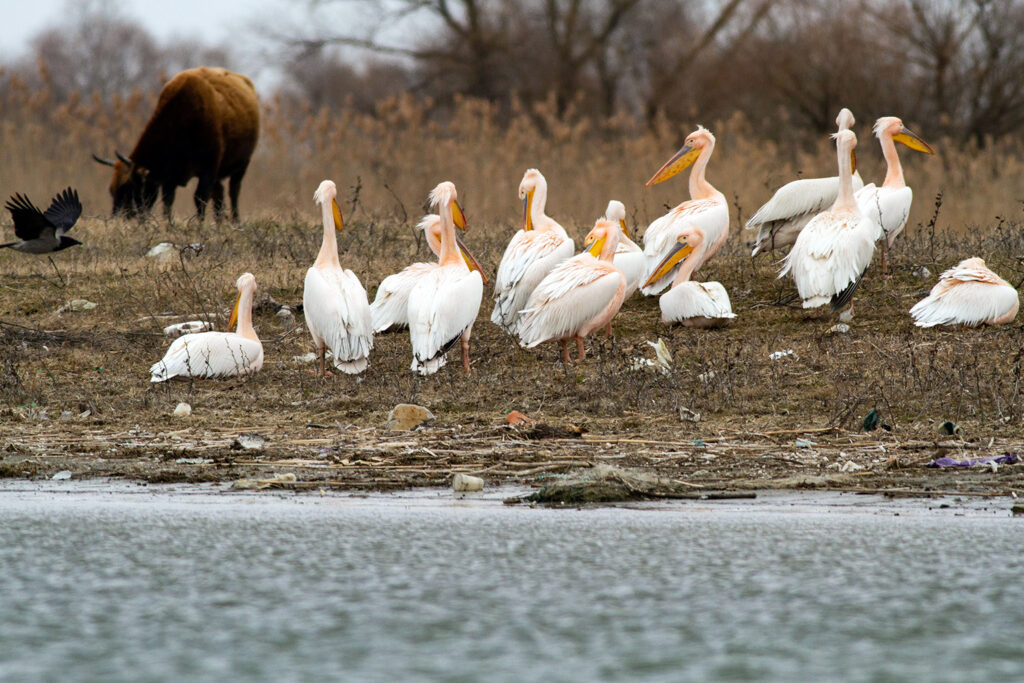 It has been almost a month since I’ve come back from my Greek part of the Dalmatian Pelican mission and I was packing again for the second part of my adventure. This time I would “follow” the Pelicans at their breeding grounds in Bulgaria and Romania. I was planning to travel by a rental car but these plans failed due to various reasons and so I had to recruit my 25 years old car for my Balkan road-trip. So I had to start the trip organization 10 days ahead with a full service of “Aquila” as I call my heroic Mitsubishi Lancer. Overcoming various difficulties and dealing with other ongoing projects I was ready to go!

So on Monday 14th of March well before sunrise, I started my journey north. I had almost 800 km ahead of me since my destination for the day was the town of Belene in North Bulgaria on the border with Romania. After an 8-hour drive through the still winter Balkan countryside I arrived at Belene and I had my first glance at the mighty Danube. I drove directly to Persina National Park visitor center. There I finally met (in person, after some Skype calls) my local contacts, Svilen from the Bulgarian Society for the Protection of Birds (BSPB) /BirdLife Bulgaria and Daniela and Vesco from Persina NP. They gave me a tour of the visitor center and I immediately noticed that the Dalmatian Pelican is definitely the star of the region. The species was the centerpiece of the visitor center, I could see it everywhere from children’s paintings to a life-size model “posing” in front of the other endangered species of the area the Sturgeons. After the visitor center, we drove alongside the riverbanks and enjoyed the sunset at the Danube while a big cargo ship was passing upstream. 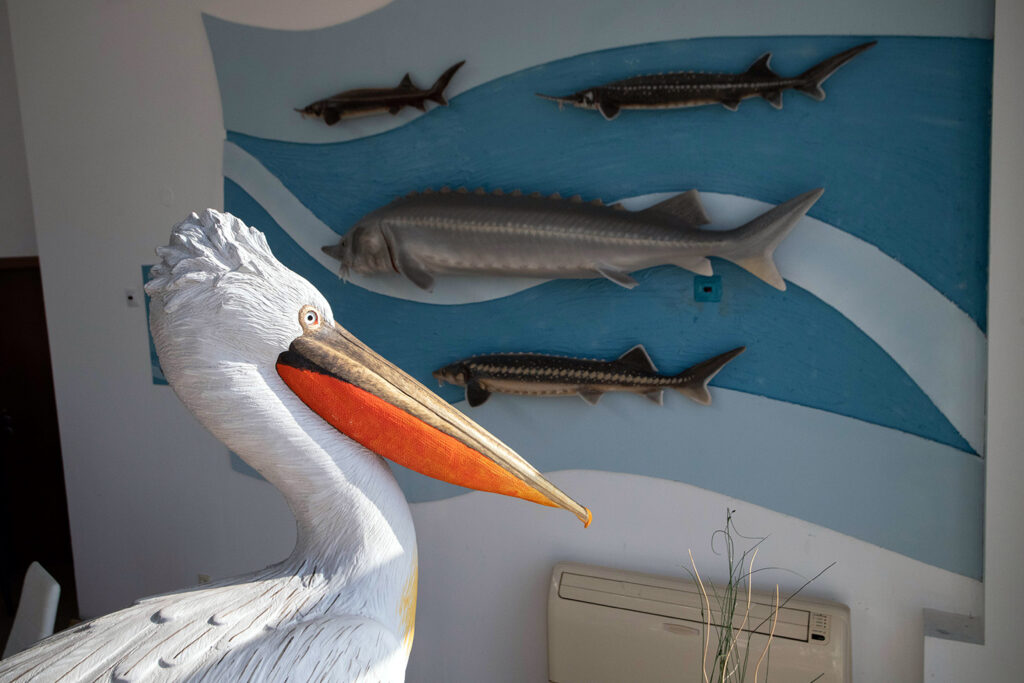 The next day an early start was not an option since we had to wait for the prison’s operation hours… Yes, you read correctly, the prison! Here at Persina NP, on Persina island, in the middle of the Danube, lies probably the most protected Dalmatian colony in the world. Since on the island there is a high-security prison, access is restricted and it’s possible only from the one bridge that is connecting the island with the mainland. The people of Persina NP had arranged everything so I can have the necessary permit to enter the island and so there we were, waiting for the prison’s entrance on the bridge to open. We started driving around the island and we left the prison behind us. Pristine riverine forest of black and white Poplar was surrounding us. 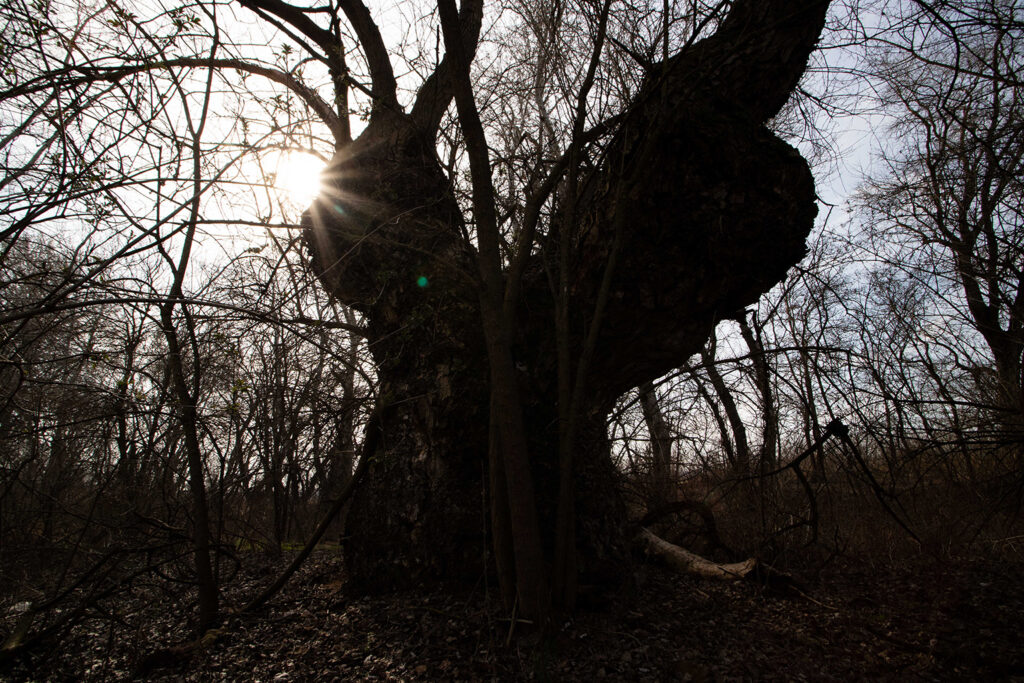 Svilen told me that this year’s Spring was extremely strange with very little rain so the marshes were completely dry. Indeed when we arrived at Persina marsh there was no water at all. We climbed the ladder of the observation tower. In front of us at a safe distance, there was a platform specially built for the Pelicans to breed on but it was empty. A bit further away there was a second platform, that one was full of birds. I observed through the scope since it was far away for photos. It was a very strange sighting to watch the Pelicans walking on the dry marsh searching for sticks to build their nests. We spent the rest of the morning wandering around the island. 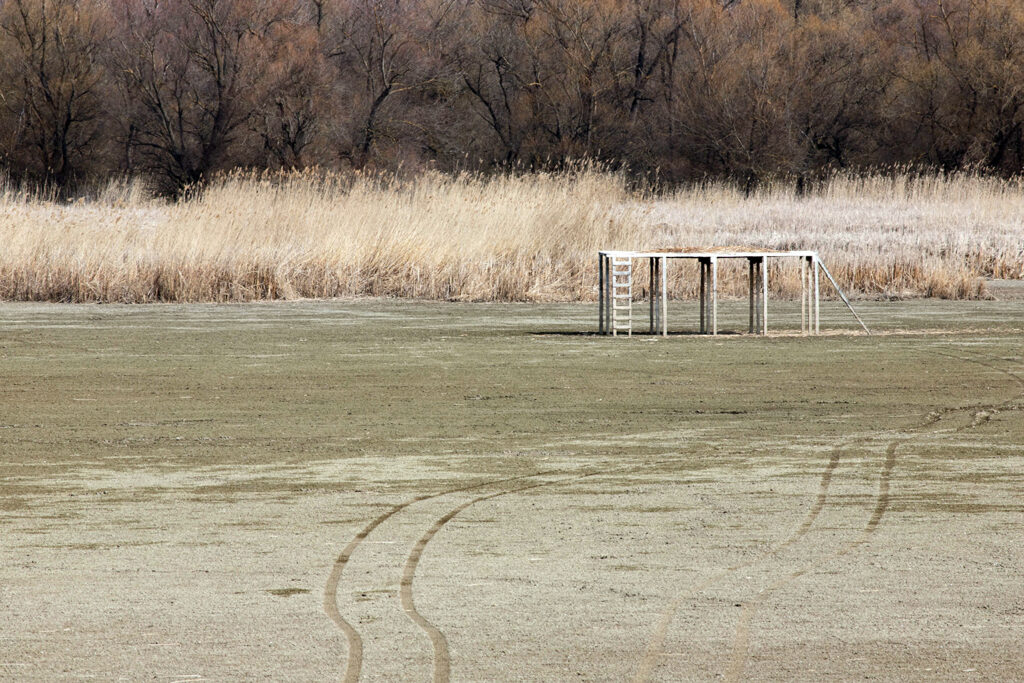 In the evening my colleagues have arranged something special for me. A boat ride around the islands of Persina NP. I have never sailed on a river before so this Danube boat ride was definitely a first for me. We went aboard the small boat and started moving upstream. Looking at the riverbanks I would see the discoloration of the plants and trees indicating the water level’s maximum height. Along the river you could see ducks swimming a kind of a strange sighting for my (Greek) eyes. 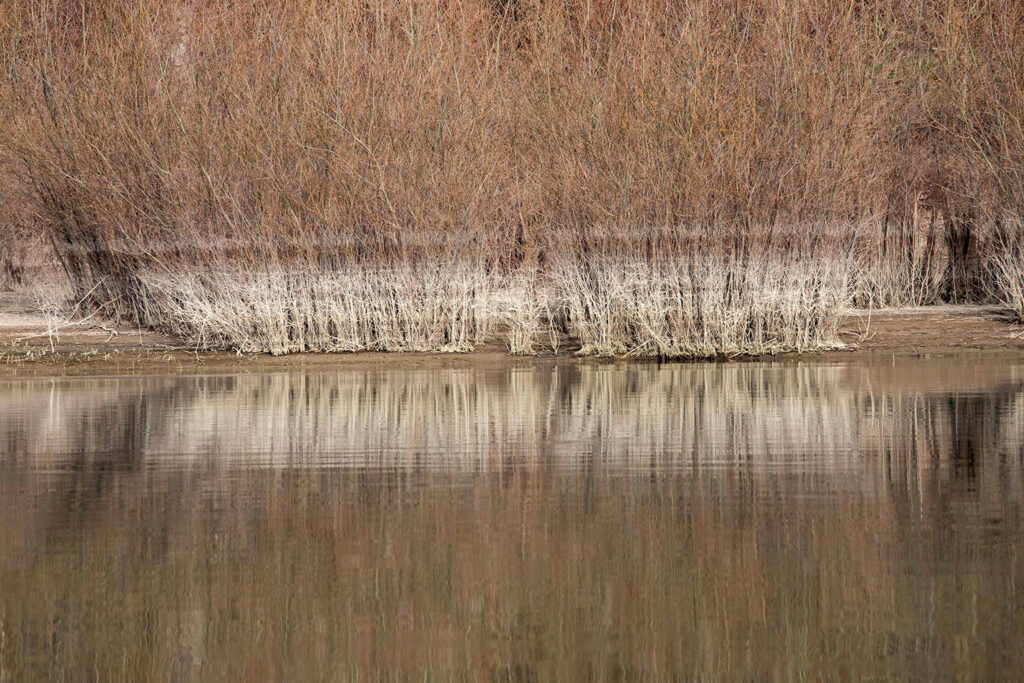 At some point Svilen pointed me to a nest of a White-tailed Sea Eagle, even at a distance, it looked huge. The species is definitely the king of the river’s sky! We passed by a heron colony that at the moment wasn’t in use but I could imagine it in Spring full of life and noise! At some point, the boat slowed down. Svilen told me “Look ahead on the sandbank, there are some Pelicans”. A group of Dalmatians was resting there so I grabbed the chance and took some shots including the landscape in the frame. I was more than satisfied by this encounter, showing the species in its typical winter riverine habitat. After the boat ride ended successfully, I ended my day tasting some of the river’s Carp at the hotel. 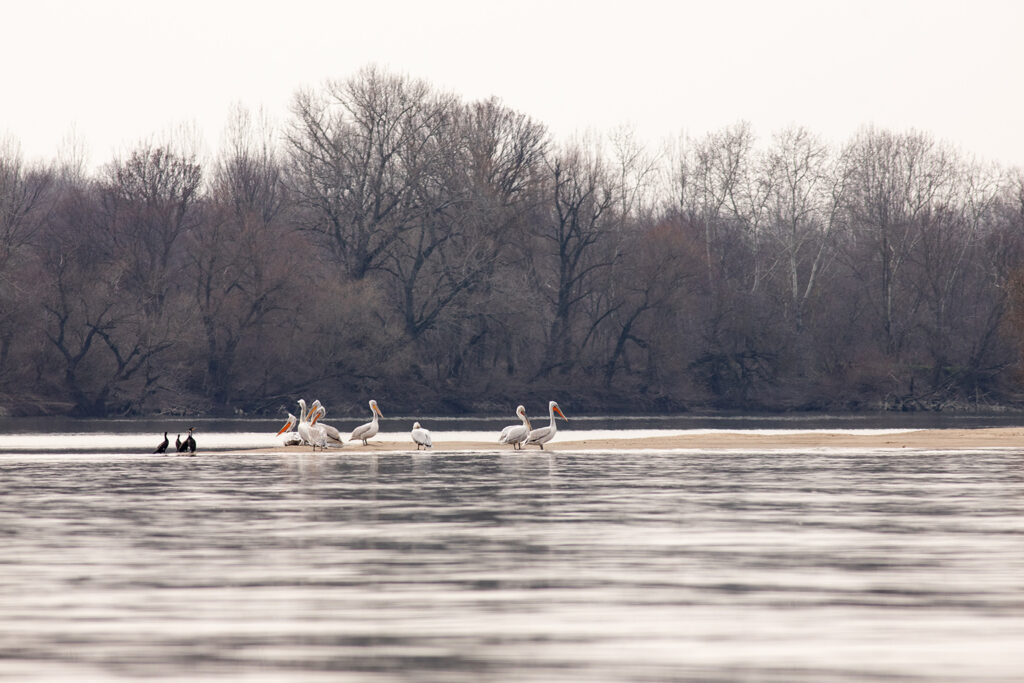 I was leaving Belene and Persina NP behind me but I’ll definitely visit this unique corner of Bulgaria again sometime. My final destination for the day was Constanța on the Black Sea coast of Romania. But I couldn’t just directly drive there, the exploration bug was bothering me. So I decided to visit some other Pelican hotspots. First, I stopped at Srebarna Lake, which reminded me a lot of Lake Mikri Prespa, the species’ stronghold. I saw the Pelicans there breeding on the platforms but from far far away. Still, I enjoyed the scenery. 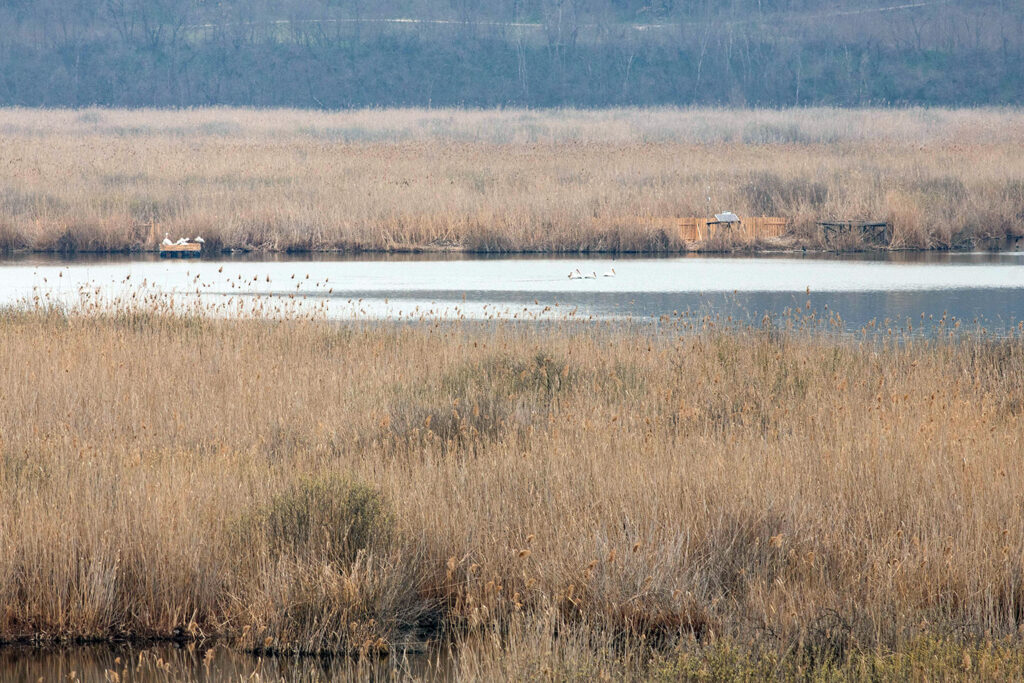 Then I crossed the border to Romania at the Silistra-Ostrov border station. The weather all day long was very “grey” typical Balkan overcast and alongside with the view of the Danube it added a very authentic feeling to the journey. My first try to find some Romanian Pelicans was at Lake Bugeac but with no luck, still I saw some very interesting landscapes. I continued my way and late in the evening I arrived at Constanța. After the long drive, I rewarded myself with a couple of pints at the city’s center before going to sleep. 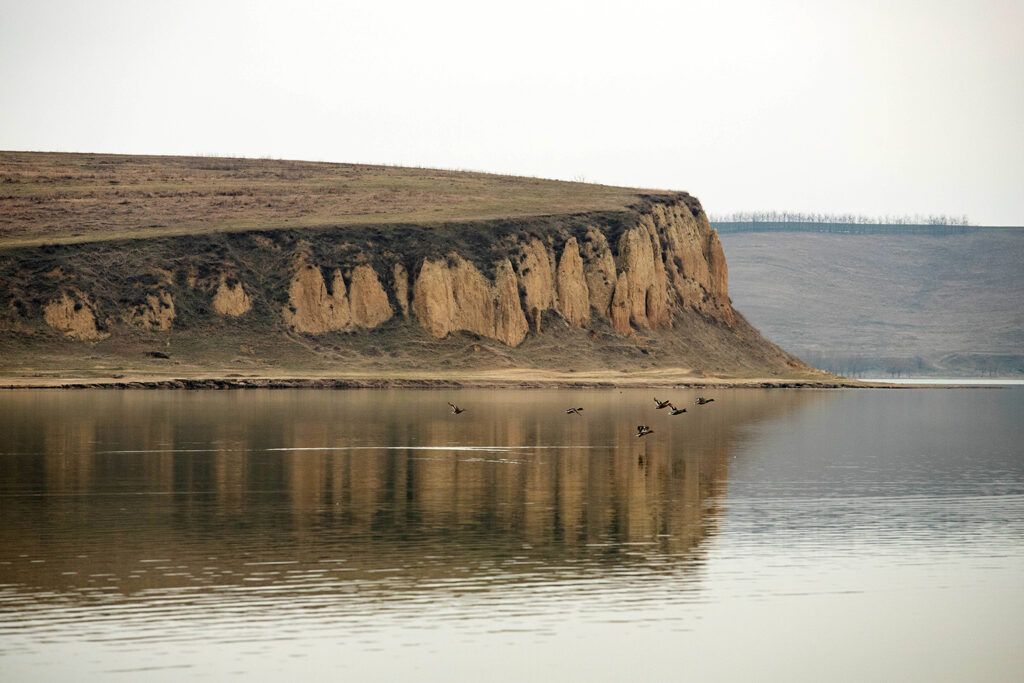 The next day I was meeting Sebastian, a biologist from the Romanian Ornithological Society (SOR) / BirdLife Romania. We set our meeting, where else, at a viewpoint of a Dalmatian Pelican colony. To be more precise we met at the coast of Lake Tașaul on the outskirts of Constanța. There, at the south end of the Lake, there is a small islet that hosts around 50 pairs of Dalmatia Pelicans. Lake Tașaul is located next to the industrial zone and a refinery and it was the first time I saw such an “industrial colony ” of the species. Even though I tried hard to get some shots of the flying pelicans with the refinery in the background they “magically” avoid it every time. 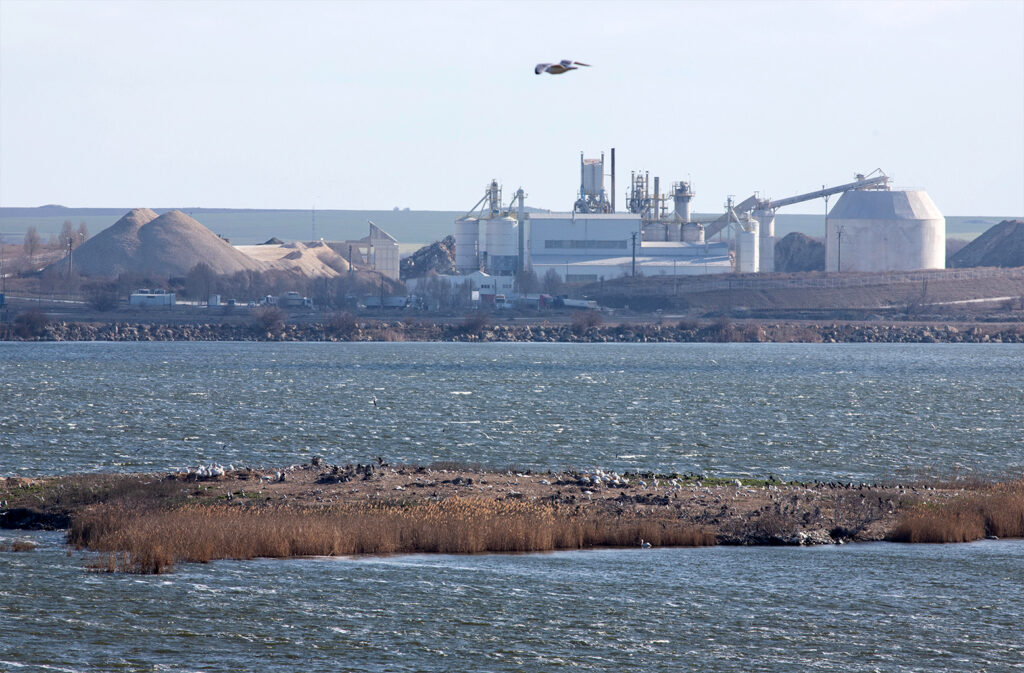 Together with Sebastian and his colleague Mihaela we visited a local fish tavern that “loves” Pelicans. We had a meeting with the manager to speak about the species and opportunities for ecotourism. After some talking the owner told me “Do you want to photograph the Pelicans? They usually hang around in front of the tavern”. And there they were, two birds swimming just in front of us with the village in the background. The manager explained to me that while they clean the fish at the shores of the lake, the Pelicans come to feed on the remains. Another win-win situation for the species and the local stakeholders. After spending the day around Lake Tașaul we continued our way north. Sebastian was an excellent host and we stopped at some really nice wetlands along the coast of the Black Sea. Finally, in the evening we reached the far east of the European Union, the town of Tulcea, the gateway to the Danube Delta. 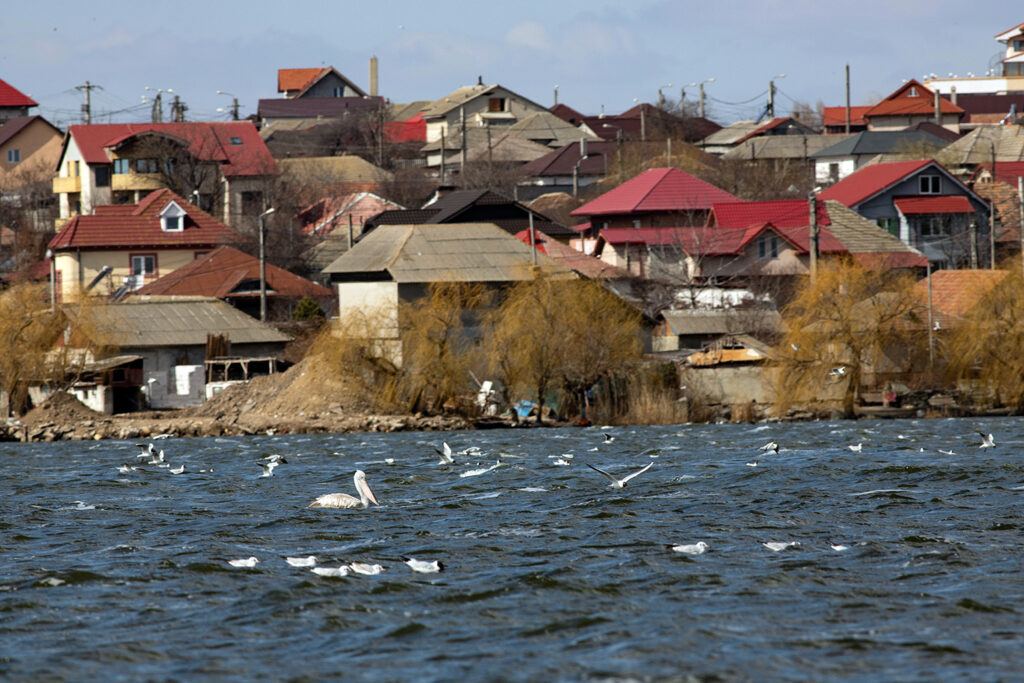 Finally, the day of The Delta has arrived! Since the beginning of the planning of the mission, I was dreaming of this mystical place, The Delta of the Danube River. We met at the port with our boatman and guide Mr. Petrescu. When he saw me, all dressed up in technical mountain clothes he asked me: “do you have enough clothes? It’s going to be very cold”. He and Sebastian kept insisting on that, so I knew that a freezing cold day was ahead of us. The boat started and we quickly left the main channel behind us and enter the maze of smaller water corridors. 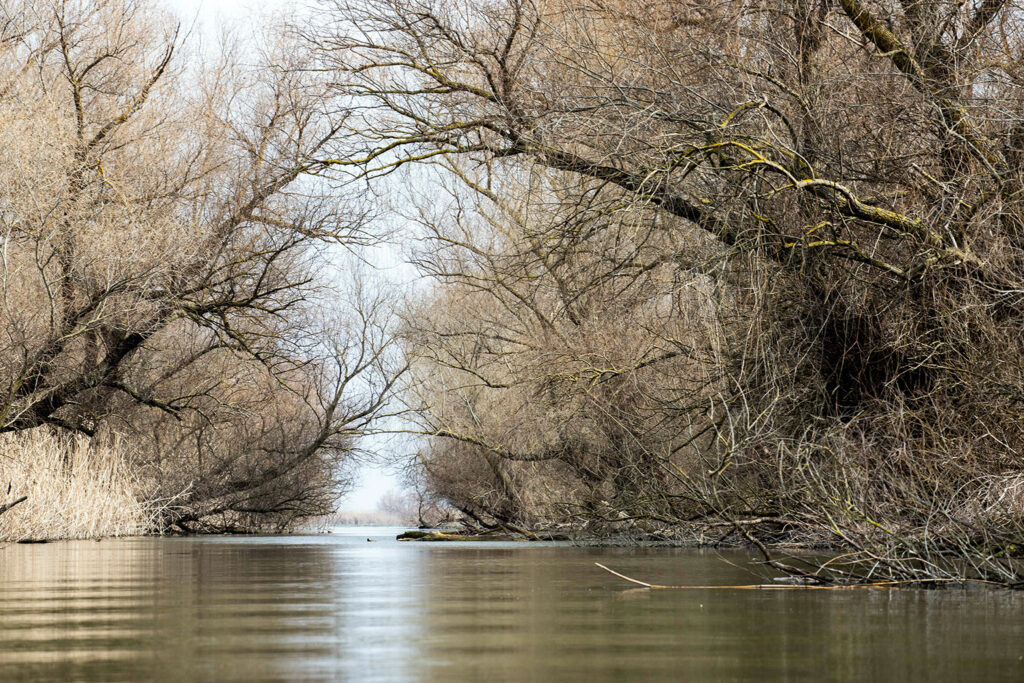 It was still winter in the Delta, in some places, there was even ice on the river’s surface. Even though I was seeing familiar species, one thing was definitely different from what I’ve been used to, the numbers! Thousands of birds were surrounding us! There in the middle of Lake Fortuna, it hit me, I was now standing in the middle of one of Europe’s last truly wild places! 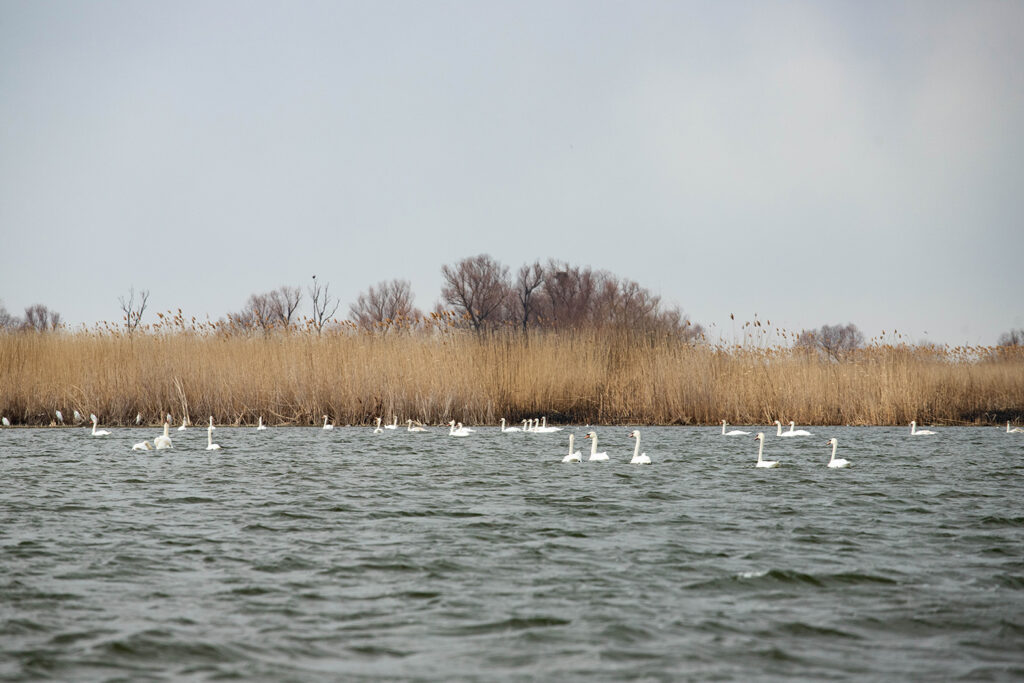 We continued our ride and we started observing White-tailed Sea Eagles like they were common buzzards! At some point, we stopped for a coffee break and then I realized that my ears were quite frozen, my mountaineering beanie was too weak for the Danube’s cold. Mr. Petrescu offered me a warm hat alongside some hot coffee. 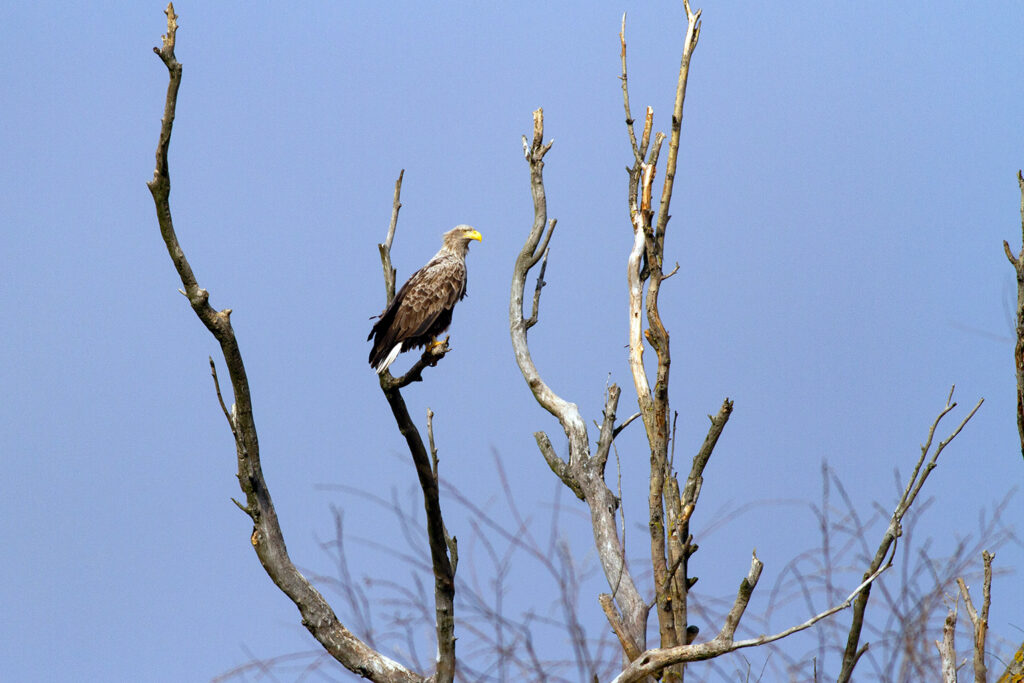 After the short break, we continued our way. Suddenly we saw signs of civilization, an electricity line in the middle of the channel. After a few meters, we discovered a dead White Pelican in full breeding plumage, under the line, probably a victim of collision/electrocution. We recorded the incident and took some shots. After a while, we reached the village of Mila 23. It was my first time to see a river community. This village in the middle of the river is only accessible via boat! 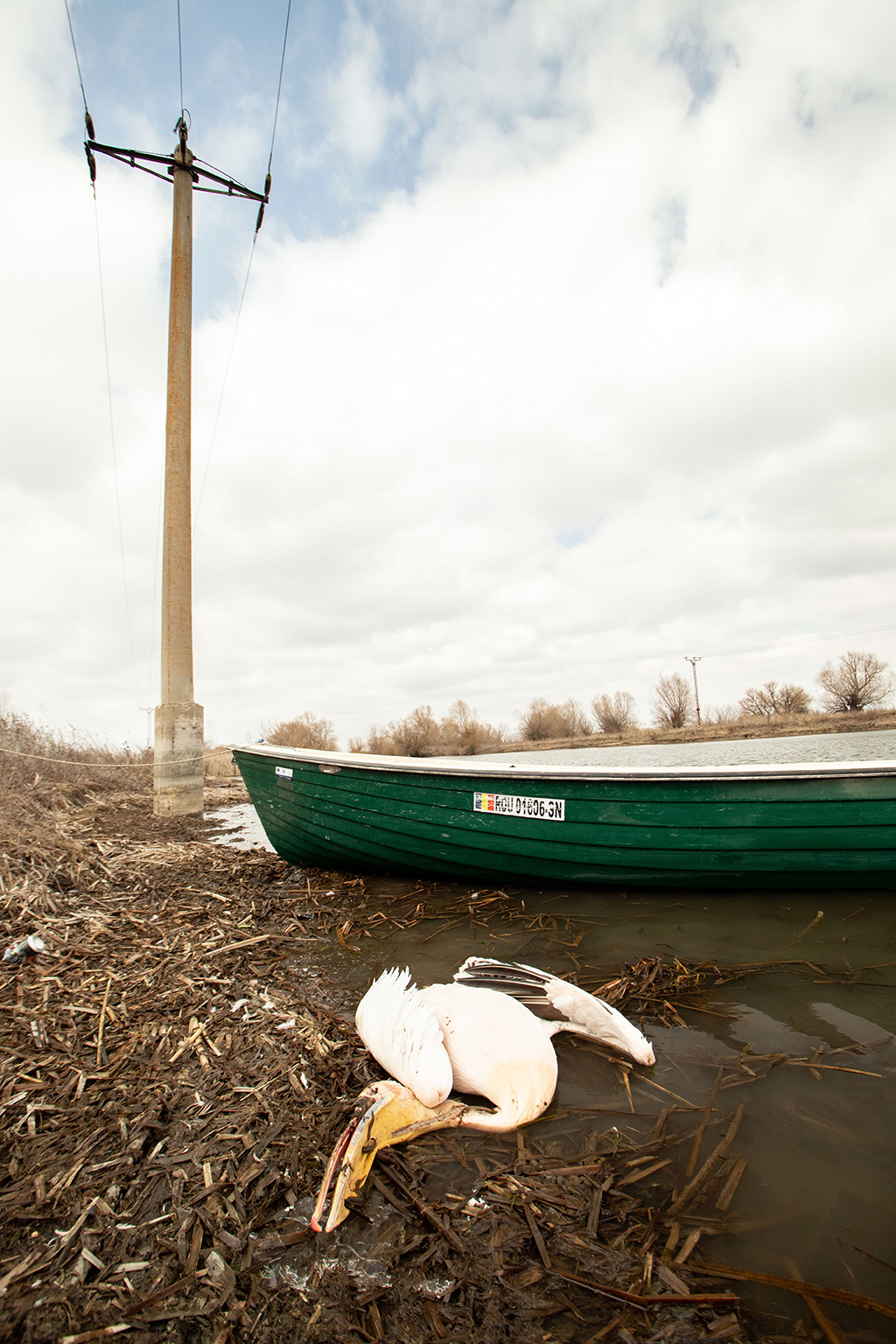 Next to the village a group of White Pelicans was resting on the grass while two Dalmatian ones were fishing in the “suburbs” of Mila 23. We devoted sometime taking pictures and we entered even deeper in the Delta. Time passed really quickly and my camera cards were full of images of the winter Delta. We took the way back but I promised to myself to visit this place again and explore it in depth. We returned to Tulcea and had a nice diner to recover from the cold day in the field. My Balkan Odyssey was coming to an end and the next day I would have to start my way south.

The last stop of the trip for my last night was the city of Burgas. I had only a few hours of light there so I decided to devote myself to photographing some very unique electricity pylons I’ve seen there on a previous visit some years ago. These high voltage pylons were not in use since 25 or so years and they were occupied by Cormorants who were nesting on them. But I couldn’t find the pylons! I remember seeing them from the main road but now they were nowhere to be find. I stopped at BSPB’s visitors center where I asked about the pylons. They told me that the Cormorant’s highly erosive excrement have demolished the iron pylons and from a total of 12 only one was now still standing. I ended this photographic mission by taking pictures of the last standing pylon. While walking back, I saw the remains of the fallen pylon. In just 25 years nature have managed to “win” the manmade metal. In my mind I was quoting Dr. Ian Malcolm from Jurassic Park, “Nature will find a way…” 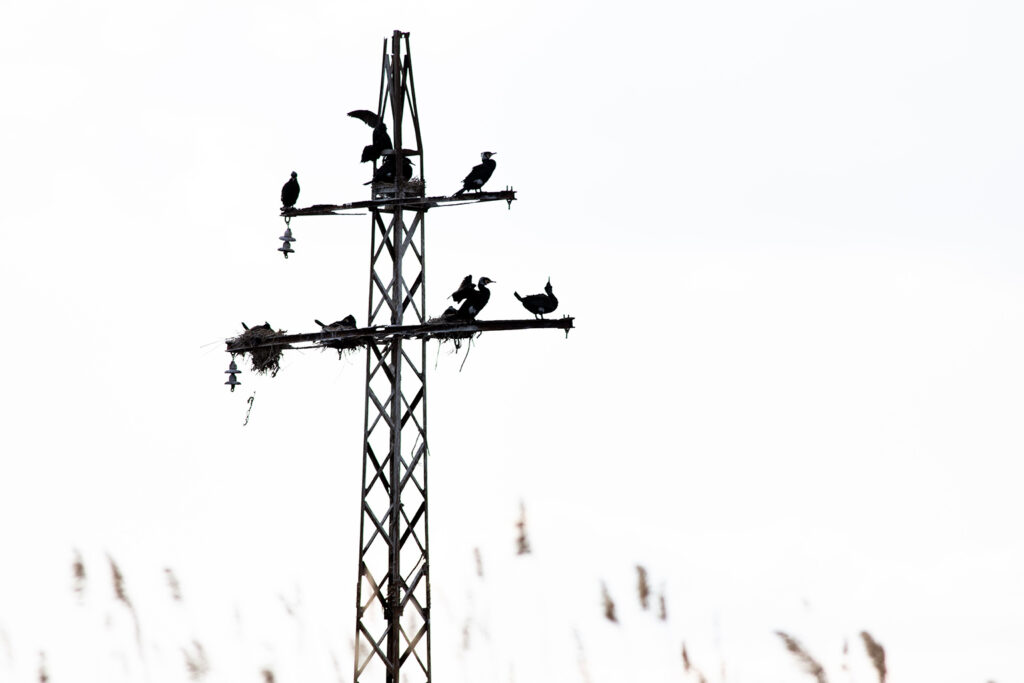